Smoqua 2019 – 3rd Festival of Queer and Feminist Culture in Rijeka 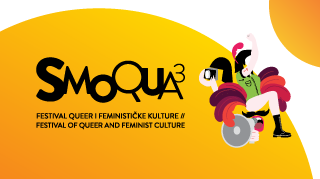 Lesbian Organisation Rijeka LORI, in collaboration with PaRiter, From the Citizens to Their City and Centre for Women’s Studies (University of Rijeka), would like to invite you to the 3rd Smoqua – Festival of Queer and Feminist Culture, taking place in Rijeka from Thursday 23 May to Saturday 25 May 2019.

Once more, Smoqua offers a rich and diverse international programme – hosting more than 23 activists and artists from over 14 countries, and volunteers coming from different countries in Europe!

Smoqua is a combination of art and activism, serving as a networking platform for art /activist projects and for creating and strengthening collaboration among diverse audiences.

As an international festival, Smoqua brings together participants from different countries, and features activities in English. As in its previous instances, visitors have the opportunity to learn about the history and significance of queer and feminism and to question social, gender and other norms and notions of normality and normativity through different workshops, panel discussions, performances, exhibitions, and sharing experiences.
The overarching theme of this edition of Smoqua is Norm, Normality, Normativity and all the activities within the Festival are aimed at questioning and deconstructing these notions.

Smoqua is part of the Flagship Kitchen, Rijeka 2020 – European Capital of Culture.

**** Meeting point – OKC Palach, Kružna ulica 8
The well-known Palach is the hangout spot for the whole duration of the Festival, from 12 pm to 8 pm. In its friendly atmosphere, visitors can get information about the Festival, donate in return for promo materials (bags, badges, etc.), and mingle with the organisers, volunteers, participants and other visitors.

15:00 – 17:00 Drum Workshop, Selena Simić (SR)
A workshop, at the same time a teambuilding session, where women and girls have an opportunity to learn the basics of drumming and to find out how drums are used in activism and street activism. Selena Simić is an activist, a drummer, and the organiser of the Rock Camp for Girls. She supports Street Drummers, a drumming band participating in Women’s Day marches.
Due to the restricted number of participants, registration is required via email at: udruga@pariter.hr
OKC Palach, Kružna ulica 8

15:00 – 18:00 Performance: The Right to Orgasm at 60+, Vlasta Delimar (HR)
Performing in a public space, the artist, who is herself over 60 years old, points out the importance of sexual life/pleasure in older age and raises the issue of sexuality as a human right. Since the 1970s Vlasta has insisted on the body as a primary artistic medium.
FUTURA NOVA shop window, Ante Starčevića 5a (ex-Garibaldi)

17:30 – 18:00 Opening of the Festival
Short speeches from the organisers about the Festival programme, followed by refreshments.
RiHub, Ivana Grohovca 1/a

21:00 – 00:00 Concert: Anna Calvi (UK)
Since 2011, when she first appeared on stage, this emotional songwriter, singer and guitar virtuoso has been an invaluable part of British music. In Rijeka, she will be promoting her third album, called Hunter. Tickets are priced at 120 kuna before or on 22 May, and 140 kuna on the day of the concert. They can be purchased in Dallas Music shop in Rijeka or through the Entrio.hr system.
Park of the Governor’s Palace (Maritime and History Museum of the Croatian Littoral Rijeka), Muzejski trg 1

The concert is part of the Furioza Cycle within the Flagship Kitchen and RIJEKA 2020 – European Capital of Culture. More info here.

12:00 – 15:00 Workshop: Introducing Activism through Non-Formal Education/Learning, Aikaterini Manousaki (GR) – Active Rainbow (international platform)
Are you interested in finding out more about non-formal education as a tool for promoting LGBTQ+ inclusion? In this workshop, you are invited to experience your own self from a completely new perspective, using different non-formal tools: bodywork, media, games, discussions. We are going to question the existing norms and exchange the possibilities for new experiences through the Erasmus+ programme. The workshop is led by Cathy (Aikaterini) Manousaki, the founder of Active Rainbow, an educational platform focused on human rights and LGBTIQIA+ topics.
Due to the restricted number of participants, registration is required via email at: czsrijeka@gmail.com
Faculty of Humanities and Social Sciences in Rijeka, Sveučilišna Avenija 4 (4th floor, room 401)

14:30 Presenting the Queer Mural and the What Do the Citizens of Rijeka Consider Normal? Survey, female artists from Rijeka
During Smoqua, a mural will be built by Tanja Blašković, Nika Krajnović and Luisa Ritoša, artists from Rijeka, based on the data gathered in a survey on the notion of normality (April 2019, PaRiter).
OKC Palach, Kružna ulica 8

15:00 – 17:00 Games Without Borders
Short interactive and educational games are meant not only to amuse, but also to inform and sensitise the visitors on topics of human rights, everyday life of LGBTIQ persons, female reproductive rights and so on. Facilitated by Antonia Pindulić, activist (HR/BE).
OKC Palach, Kružna ulica 8

17:00 – 18:00 Conversation with the Artists: On Normality
Facilitated by: Zvonimir Dobrović (HR); speakers: Boryana Rossa (BG/US) and Vlasta Delimar (HR).
From the Citizens to Their City, Križanićeva 6a

18:00 – 20:00 Performance: Deconstruction of VALIE EXPORT’S Tap and Touch Cinema, Boryana Rossa (BG/US)
Boryana Rossa presents her own version of VALIE EXPORT’s classic performance (1968), in which the artist invites the audience to touch her breasts, hidden inside the box that covers the upper part of her body. Boryana Rossa is an interdisciplinary artist and curator, present on the international scene for about 20 years. During the Festival, visitors will have the opportunity to see her work titled Madonna of the External Silicone Breast exhibited in public space (city lights on Titov trg).
From the Citizens to Their City, Križanićeva 6a

21:00 – 00:00 Hangout in Palach + Introducing the Rock Camp for Girls, Selena Simić (SR)
Join us in hanging out while listening to music and the presentation of Selena’s work in bands and the Rock Camp for Girls. As the first of its type in the region, this camp, along with the workshops led by Selena, creates great interest in both its participants and the general public, since its aim is to empower women and girls to enjoy music regardless of the instrument they choose, and regardless of whether that instrument is being perceived as predominantly ‘male’ or ‘female’ by social norms.
OKC Palach, Kružna ulica 8

21:45 – 22:15 Theatre Play: What Are We, Really, Guilty of?, CEKER – Centre for Creative Develop-ment and the GLLUGL association of artists (HR)
This play is based on improvisation created in the European Youth Engagement Network project, financed by the European Union within the Europe for Citizens Programme.
The play follows three women in a police station, held in remand, after being arrested during the night. It is obvious that one of them is a minor. While they are waiting to see what will happen to them, we learn why they ended up there. Behind the story about their ’crimes’ we gradually discover how their lives are marked with humiliation, abuse and harassment. A number of painful topics and current issues are brought up – from attacks on women’s rights to domestic violence.
Author and director: Ksenija Krčar. Actors: Snježana Roško, Kristina Kutnjak and Inka Eldan.
OKC Palach, Kružna ulica 8

14:00 – 16:00 Games Without Borders
Short interactive and educational games are meant not only to amuse, but also to inform and sensitise the visitors on topics of human rights, everyday life of LGBTIQ persons, female reproductive rights and so on. Facilitated by Antonia Pindulić, activist (HR/BE).
OKC Palach, Kružna ulica 8

16:00 – 18:00 Interactive Workshop: Why did Baby Get To Dance with John? – Abortion Stories in Movies and TV Series, Karolina Wieckiewicz (PL)
Do you know how abortion is perceived and represented in cinema and how it was represented earlier? These, along with others, are the topics you will have the opportunity to consider in this workshop led by Karolina Wieckiewicz, an LGBT and abortion activist from Poland. In her work, Wieckiewicz, member of the Abortion Dream Team and programme officer at Lambda Warsaw, focuses on normalisation and destigmatisation of abortion experience.
OKC Palach, Kružna ulica 8

16:00 – 18:00 Dance and Movement Workshop: Manada, Azahara Ubera (ES)
Manada (‘herd’) is a toolbox of methodologies used to create collective knowledge through a technological, transfeminist, and posthumanistic approach to the body. As a group practice, it is useful to open spaces of trust, care, and physical comfort with others, in order to create a sense of community.
Azahara Ubera is an independent researcher, dancer and choreographer that inhabits the liminal spaces of dance, sound, pedagogy and activism.
OKC Palach, Kružna ulica 8

18:00 – 19:00 Dance Performance: Trouble, Lau Lukkarila (FI/AT)
Trouble is a solo piece based on a research in trouble and troublemaking. Lau is an interdisciplinary performance artist, dancer, cultural labourer and queer, who cherishes fluidity and places themselves in a productive ‘oppositional standpoint’ considering stereotypical ideas about normalcy. They were born in Finland and currently live and work in Vienna.
OKC Palach, Kružna ulica 8

19:00 – 20:30 Film Screening: Sidney & Friends (2018, UK&KE, 75ꞌ) and Conversation with the Director
When his family tries to kill him, Sidney, who is intersex, flees to Nairobi where he meets a group of transgender friends. Together, they fight discrimination and discover life, love and self-worth. This documentary (filmed for more than 3 years) is a heartfelt exploration of the hopes, dreams, and everyday reality of a group of intersex and transgender friends fighting to survive on the edge of Kenyan society. The film has won 9 awards and 6 nominations at various film festivals all around the world. Tristan Aitchison (Scotland) is a filmmaker and photographer with an interest in documenting social issues.
Director: Tristan Aitchison. Cast: Michael Daviot, Awuor Onyango, Charles Ouda
Art-kino, Krešimirova 2

23:30 – 05:30 Queer UP! Party by LORI: Warrego Valles (SL)
Warrego Valles is an electronic project by two Ninas – Nina Hudej and Nina Kodrič (aka NinaBelle) –within which they intensively explore the bypasses of club and experimental electronic music, performing in various venues in Slovenia and abroad as DJs or an audio-visual live show act. They include a rich electronic production of women, trans and non-binary artists as they firmly believe that diversity and inclusiveness are necessary to develop any kind of club culture.
Club Crkva, Ružićeva 22

00:00 – 00:45 Drag King Show: Eclipse (FR/BE)
Eclipse was ‘born’ more than 3 years ago in Brussels and has since then won several awards in drag contests and toured around Europe. More than a theatrical production, Eclipse’s acts are a statement for equality between women and men. Eclipse serves comedy as a powerful tool for change.
Club Crkva, Ružićeva 22

* Participation in all Festival activities is free, except for the Queer UP! Party (where donations will be collected at the entrance), and the Anna Calvi concert.

Organisers: LORI in collaboration with PaRiter, From the Citizens to Their City, Centre for Women’s Studies (University of Rijeka)